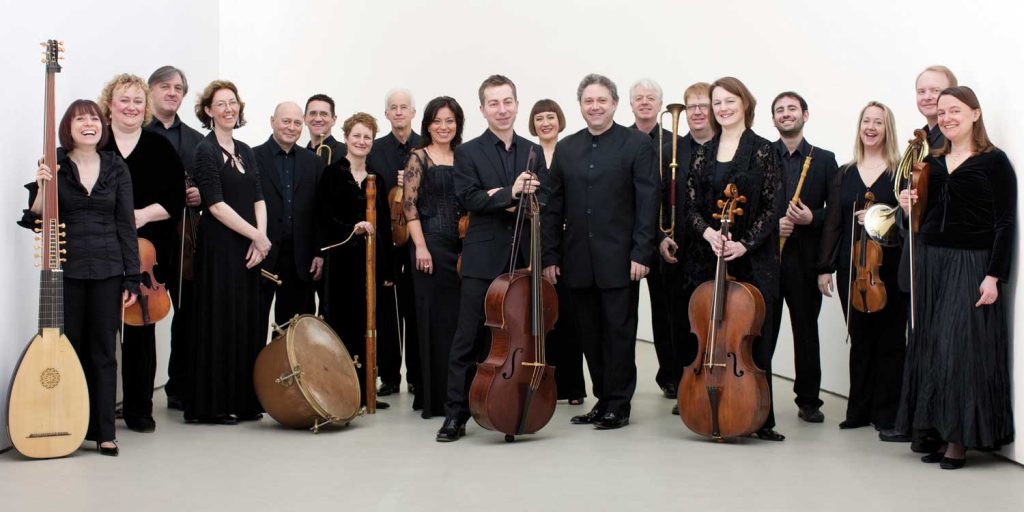 It is always a treat when our concert series presents the splendor of a full baroque chamber orchestra, and our December presentation—a one-time-only event on Friday evening, December 13—will be something special, featuring one of the first and most distinguished of such orchestras. The Academy of Ancient Music, founded by Christopher Hogwood in 1973, has remained at the forefront of the worldwide early music scene for over four decades. The Academy has always been a pioneer. It was established to make the first British recordings of orchestral works using instruments from the baroque and Classical periods and has released more than 300 discs, many of which are still considered definitive performances. (Among its countless accolades for recording are Classic BRIT, Gramophone and Edison awards.)  The orchestra has earned a worldwide reputation for excellence in baroque and Classical music, taking inspiration directly from the music’s composers, using historically informed techniques, period-specific instruments and original sources to bring music to life in committed, vibrant performances of everything from large-scale vocal masterpieces, including Bach’s St. John Passion and Handel’s Israel in Egypt, to ground-breaking modern premieres, such as Jan Ladislav Dussek’s Mass in G Minor, a piece which hasn’t seen the light of day since 1811. 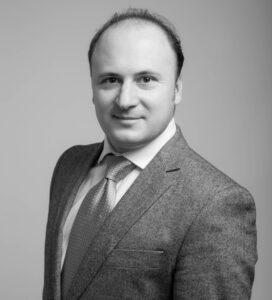 AAM’s SFEMS concert offers an evening of music to stir the soul and lift the spirits. This is a concert that promises to send you home with a smile on your face and a spring in your step. Some of the baroque era’s musical masters—Bach, Handel, Corelli, Purcell, and more—will be heard at their most irrepressibly joyful celebratory, and effervescent. The orchestra will joined by rising young soprano Rowan Pierce and trumpeter David Blackadder, the instrument’s finest living champion. As many readers undoubtedly know, Richard Egarr, who served as AAM’s Music Director from 2006 until this year recently was appointed to the be director of the Bay Area’s Philharmonia Baroque Orchestra. The Academy’s SFEMS performance will be conducted by Bojan Čičić, who also will be featured as violin soloist. Jo Kirkbride contributed the following notes on the music they will perform:

There are few more jubilant and uplifting sounds in music than the natural trumpet. With its bright, piercing tone and rich timbre, it has become an emblem of the baroque, signalling occasions of joy, triumph and celebration. Writing around 1700, the renowned critic and amateur musician, Roger North, described the trumpet as a ‘small, portable, comodious and martiall tube,’ one that was ‘glorious and admired.’ With new advances in instrument technology, this was the golden age of the trumpet and just about every composer across Europe—from Bach to Vivaldi, Handel and Purcell—intended to make the most of this glorious new sound. 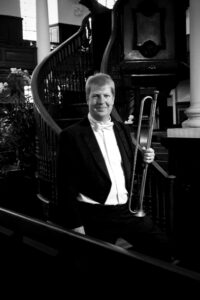 It is a little ironic, then, that the person responsible for composing the best-known piece for baroque trumpet is far from a household name. A successor to Purcell at London’s Chapel Royal and later organist at St Paul’s Cathedral, Jeremiah Clarke (1674–1707) is now rightfully credited as the composer of the popular wedding voluntary The Prince of Denmark’s March—better known simply as the Trumpet Voluntary—but for many years the work (along with several others) was wrongly attributed to Purcell. Among a handful of other pieces for trumpet in his output is the brisk voluntary Mr Shore’s Trumpett Tune, composed for the leading English trumpet virtuoso of the day, John Shore. We know that both Purcell and Handel wrote some of their most demanding trumpets parts with Shore in mind, and although Clarke’s voluntary is somewhat modest by comparison, its high tessitura and skilful ornamentation give us a glimpse into Shore’s technical proficiency.

If Clarke was England’s trumpet composer du jour, then Giuseppe Torelli (1658–1709) held the same status in Italy. His catalogue contains more than 35 works for between one and four trumpets, making him by far the most prolific Baroque composer of his kind. The proliferation of music for trumpet owes much to his position in Bologna, then Italy’s most important cultural centre, which had at its centre the vast church of San Petronio. Often used as the site of celebratory and royal occasions, there could be no more fitting setting for the splendour of Torelli’s trumpet music, as the regal poise and grandeur of his Concerto for Trumpet in D major demonstrates. These were the early days of the concerto and Torelli—and then Vivaldi (whom Torelli is thought to have taught)—was instrumental in its development: it has many of the hallmarks of the mature concerto style, from the repeated ritornellos to the fizzing energy of its melodic writing.

The popularity of trumpet music in the early eighteenth century also had a knock-on effect on other genres, often leading composers to mimic its distinctive, triadic melodicism when writing for other instruments, and even for the voice. Purcell did so famously in the duet ‘Sound the Trumpet’ from his ode Come, Ye Sons of Art, leading his son, Daniel Purcell (1664–1717) to follow suit just a few years later. Daniel Purcell even gave his aria the same name, but ‘Sound the Trumpet’ from The Masque of Hymen (ca. 1696) takes the allusion a step further, uniting the soprano voice with the trumpet itself. He was not the first to do so—the advent of the ‘trumpet aria’ can be traced back to Monteverdi and the ‘war-like’ style of his madrigals—but it was to prove a popular and compelling pairing that countless other eighteenth-century composers would replicate.

Few did so more successfully than George Frideric Handel (1685–1759), for whom the trumpet aria became something of a party piece. These were times of significant stylistic change in vocal music, with the influence of Italian opera creating an appetite for showmanship and virtuosity. For Handel, it presented an opportunity to transform the landscape of musical drama, synthesising elements from the opera house with those from the concert platform to create dazzling new showpieces with a far broader appeal. Oratorios provided the answer. Unlike operas, oratorios were intended for the concert stage rather than the theatre and did not require expensive sets or costumes, meaning they were cheaper to put on and could be performed almost anywhere. They were also more suited to the English language, which allowed Handel to write in a more direct and simple manner that had a far greater public appeal. 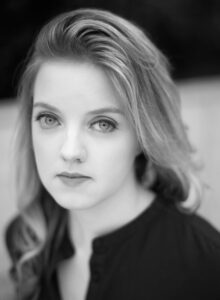 But if oratorios gave Handel a platform for greater artistic freedom, he had already laid down their foundations far earlier in his career, even as far back as his early sacred works. What we now know to be Handel’s Gloria setting is thought to have been composed as far back as 1707 when he was just 22 years old. The score and parts were only rediscovered in the library of London’s Royal Academy of Music’s in 2001, and although neither is in Handel’s own hand, its distinctive melodicism and use of dissonance have led scholars to attribute the work to Handel’s early style. This is not a modest, reticent setting of a familiar sacred text but a flamboyant work for coloratura soprano in an operatic style, likely to have been influenced by Handel’s travels to Italy in 1707. There is more than a hint of ‘Rejoice greatly’ from Messiah in the buoyant Laudamus te, while the deeply expressive Qui tollis peccata mundi could just as easily have been lifted from one of his later opera arias. Handel was evidently pleased with the finished score, since numerous parts were later reused in other works, including his Chandos and Coronation anthems.

Handel composed his first oratorio, Esther, in 1718 and by the late 1740s, his oratorios had become iconic pieces of the repertoire. Messiah premiered in 1742 to great adulation, with Semele and Samson opening the next year. Samson contains perhaps the most iconic trumpet aria of them all, Let the bright seraphim, in which the soprano soloist summons celestial hosts of cherubim and seraphim in honour of the dead hero, Samson. Handel composed Messiah and Samson in parallel and although the ebullient soprano aria, Rejoice greatly, O daughter of Zion does not include the trumpet, its contours and cadences nevertheless bring it to mind, as does its triumphant, fanfare-like theme.

While Handel is still best-known for his vocal music, he also composed a huge volume of instrumental concertos, including more than 30 concerti grossi—works that feature more than one soloist. The concertino (soloists) may comprise any combination of instruments, but in the case of the twelve concertos that make up Handel’s Op. 6 collection, the solo roles are given to two violins and a cello. Bridging the gap between Handel’s vocal and instrumental music, these concerti grossi were intended to be played between performances of his dramatic stage works, and in many cases they even borrow material from his odes and oratorios too. The Concerto grosso in G major, Op. 6 No. 1, HWV319 is a case in point, having been reworked from an early draft of the overture to his opera Imeneo (1739).

Although Handel’s Op. 3 and Op. 6 collections became landmarks of the genre, he learned his craft from Arcangelo Corelli (1653–1713). Corelli was one of the most established and sought-after violinists of his day, but as a composer he produced relatively little. His reputation today rests on just six published opus numbers and a handful of posthumous publications, comprising 48 trio sonatas, 12 violin and continuo sonatas and 12 concerti grossi—all of which, unsurprisingly, have the violin as their focal instrument. But although Corelli was widely respected by his successors Geminiani, Locatelli and, later, even J.S. Bach as the ‘go to’ violin composer of his day, he explored only a fraction of the instrument’s capabilities. Few of his works take in the violin’s uppermost registers because, so the story goes, Corelli himself was not comfortable playing them. While the writing for both the soloists and full strings in the Concerto grosso in D major, Op. 6 No. 7 is relatively simple, the overall effect is one of joyful exuberance—largely thanks to Corelli’s frequent oscillations in tempo and character and some vigorous antiphonal writing.

Our programme closes with one of the most iconic works that Johann Sebastian Bach (1685–1750) would compose for trumpet—his Brandenburg Concerto No. 2 aside. The cantata, ‘Jauchzet Gott in allen Landen,’ BWV 51 is the only cantata in Bach’s extensive catalogue to be written for soprano and trumpet, and it is every bit as showy as its scoring would suggest. On the score, Bach inscribed the words ‘per ogni tempo’ (‘for any time’), and although we know that it was later used for the 15th Sunday after Trinity, the virtuosic nature of the two solo parts suggests that Bach had the unusual privilege of writing for two extremely gifted musicians. It is difficult to imagine such a dazzling showpiece featuring in the standard Sunday morning service at Leipzig’s Thomaskirche, a service that began at 7:00 a.m. and lasted until noon, of which the cantata was just one small part. It appears more likely that it was first performed at a private court and later recycled in Leipzig, where one can only imagine the congregation’s startled reaction to the glittering passagework and stratospheric vocal line of the closing Alleluia. —© Jo Kirkbride

SFEMS presents the Academy of Ancient Music one time only, at 8:00 p.m., Friday, December 13, at First Congregational Church, 2345 Channing Way, in Berkeley. Mini-subscriptions still are available. Individual Tickets may be purchased online, through the SFEMS box office at 510-528-1725, or at the door 45 minutes before each performance.