Handel and His World

George Frideric Handel was a complex figure, whose musical soul and world were woven together from experiences in three lands: Germany, Italy, and England. His Italian influence, understandably, has received great attention. However Handel was also a great admirer of Purcell and absorbed something of his great forebear’s extroverted, commemorative, characteristically English style. And he was at base also a German composer (J.S. Bach’s favorite, in fact). He was well trained in keyboard and counterpoint within the Lutheran church establishment. And he was guided by an independent and remarkably creative spirit, which led him to disobey his parents’ wishes and drop out of law school to become a composer, a resolution he made with fellow law student dropout Georg Philipp Telemann. Handel and Telemann became lifelong friends, remaining in touch and corresponding regularly after Handel relocated to London. The two even shared a passion for horticulture, and Handel sent Telemann plants from England!

Hear the connections among these three great composers in a rich and diverse a program covering 4 decades of compelling music that showcases the talents of this great ensemble. Selections include Aulos’s own Suite from The Fairy Queen, one of Telemann’s New Paris Quartets, and a great deal of fine chamber music for three and four voices by both Handel and Telemann.

Founded in 1973, THE AULOS ENSEMBLE was one of the first American “original instrument” ensembles. Its accomplishments over the past four decades have given it pre-eminence in the early music movement. 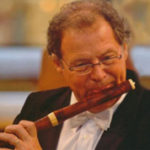 Flutist CHRISTOPHER KRUEGER received his formative musical training in Boston and graduated from the New England Conservatory of Music. He is principal flutist with the Handel and Haydn Society, Boston Early Music Festival Orchestra, the Bach Ensemble, Smithsonian Chamber Players, and Boston Baroque. He has been featured as soloist on the Great Performers Series and Mostly Mozart Festival at Lincoln Center, the City of London Festival and Lufthansa Festival in London, the Berlin Bach Festival, and at Tanglewood and Ravinia. Mr. Krueger has also performed with such diverse groups as the Drottningholm Theatre Orchestra, Aston Magna, Tafelmusik, Orpheus, and the Boston Symphony. He is Assistant Professor of Music at The University of Massachussets at Amherst, and on the faculties of the New England Conservatory and the Longy School of Music. He has recorded for DG, Sony, L’Oiseau-Lyre, RCA, Centaur, Nonesuch, and Telarc.

Oboist MARC SCHACHMAN was born in Berkeley, California and received his education at Stanford University and the Juilliard School where he was awarded the B.S., M.S., and D.M.A. degrees. He has performed as soloist and principal oboe with “original instrument” orchestras throughout America including Philharmonia Baroque (San Francisco), Handel and Haydn Society and Boston Baroque (Boston), and Mostly Mozart and The American Classical Orchestra (New York). He is a founding member of the Amadeus Winds, and performs often with groups such as Aston Magna, Helicon, Orchestra of St. Lukes and the New York Chamber Soloists. His recordings can be heard on the MHS/Musicmasters, Harmonia Mundi, Sony, L’Oiseau-Lyre, Telarc, and Centaur labels. He is on the faculty of Boston University, where he teaches oboe and baroque chamber music in the Historical Performance division.

Violinist LINDA QUAN was born in Los Angeles, California and graduated from the Juilliard School with the B.M. and M.M. degrees. She has appeared as soloist with the Los Angeles Philharmonic and the Contemporary Chamber Ensemble and has served as Concermistress with various American “original instrument” orchestras including the Handel and Haydn Society, Smithsonian Chamber Orchestra, Mostly Mozart, and the American Classical Orchestra. She is a member of the Bach Ensemble, the New York New Music Ensemble, and the Atlantic Quartet, and appears frequently with groups such as Aston Magna, St. Lukes, and Helicon. Ms. Quan has recorded for Sony, L’Oiseau-Lyre, MHS/Musicmasters, CRI, Nonesuch, Centaur, and Opus One, and is on the faculty of Vassar College. 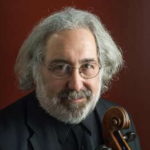 Cellist MYRON LUTZKE was born in Newark, New Jersey, and received his education at Brandeis University and the Julliard School, where he received his Bachelor of Music degree. Mr. Lutzke is a member of the St. Luke’s Chamber Ensemble, the Mozartean Players, and the Bach Ensemble and is the principal cellist for many of this country’s “originial instrument” orchestras, including the Handel and Haydn Society, Boston Early Music Festival Orchestra, and Mostly Mozart Original Instrument Orchestra,and the Orchestra of St. Luke’s. He is an artist-in-residence at the Caramoor Festival and teaches at the Mannes School of Music. His recordings can be heard on the Harmonia Mundi, MHS/Musicmasters, Sony, L’Oiseau-Lyre, Nonesuch, Centaur,and Arabesque labels.

Harpsichordist ARTHUR HAAS was born in New York but grew up in Los Angeles and attended the Juilliard School and UCLA where he received a Master’s degree in historical musicology. In 1975 he received the highest prize from the 2nd International Paris Harpsichord Competition and was subsequently appointed Professor of Harpsichord and Baroque Performance Practice at L’Ecole Nationale de Musique in Angouleme. In 1983 he returned to the U.S. to teach at the Eastman School of Music and at SUNY Stony Brook. He has performed with many New York ensembles including Orpheus and the Orchestra of St. Luke’s and has appeared as soloist at the Mostly Mozart and Caramoor Festivals. Mr. Haas has recorded for EMI, Harmonia Mundi, Centaur and MHS/Musicmasters labels, and has given harpsichord recitals, and master classes throughout America and Europe. He is currently on the faculty of SUNY Stony Brook and the Mannes College of Music in New York.