San Francisco Renaissance Voices is pleased to announce the appointment of Ms. Katherine McKee as Music Director effective the upcoming 2014–15 season. Ms. McKee replaces Mr. Todd Jolly, who has led the group as Music Director since its founding in 2004. Mr. Jolly has been appointed to the honorary position of Emeritus Music Director that will enable him to spend more time composing and teaching.

Ms. McKee has served as the Assistant Music Director and Alto Section Lead of San Francisco Renaissance Voices for the past seven years and is the resident conductor for the group’s annual Boar’s Head Festival & Mid-Winter Gala.

Ms. McKee holds a Bachelor’s degree in Music Education and a Master’s degree with honors in Choral Conducting from the New England Conservatory and has directed choirs, community orchestras and operas, and school groups since her college years. In the Boston area she directed the children’s, youth and adult choirs at Hanscom Air Force Base’s Protestant Chapel, taught stringed instruments and conducted orchestras in the Somerset (MA) public schools and served as Assistant Conductor for the Jamaica Plain Symphony Orchestra. In New York she founded and directed the chamber group Premier, which focused on newly composed works for a cappella voices, and served as an Assistant Conductor for the Gregg Smith Singers and at St. Bartholomew’s Church.

San Francisco Renaissance Voices is delighted to continue their relationship with Ms. McKee in this new capacity and congratulates her on this significant appointment.

San Francisco Renaissance Voices is a San Francisco Bay Area’s professional mixed-voice a cappella vocal ensemble dedicated to the music of the Renaissance and related periods. Since its founding just ten years ago it has consistently earned praise for our “gossamer sound … a sound something akin to spiritual levitation” as well as recognition for our imaginative programming and christened the Bay Area’s “hipper than thou” Early Music ensemble by San Francisco Classical Voice. In 2010 SFWeekly chose us as “Best Classical Music” for their Best of San Francisco edition and said, “The SFRV performs [these] classics from the golden age of European polyphony the way they were meant to be heard: large ensemble voices lifting the soul for sacred moments. Living history doesn’t get any better.” 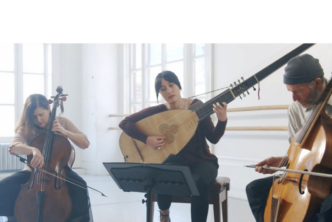 Next SFEMS Board Meeting August 16