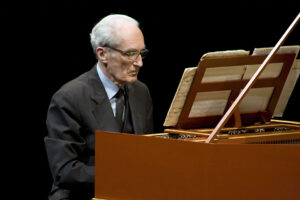 Stanford University, in cooperation with the San Francisco Early Music Society (SFEMS), will present an afternoon master class devoted to the teachings of Dutch harpsichordist Gustav Leonhardt. The class will take place on Saturday, February 29, from 1:00–3:00 p.m., in Campbell Recital Hall, Braun Music Center, 541 Lasuen Mall, on the Stanford University campus. Renowned harpsichordists Jillon Stoppels Dupree and Elaine Thornburgh, who met while studying with him in Amsterdam, will share highlights of their lessons as they instruct the master class students. They have since collaborated as duo harpsichordists and teaching partners. Repertoire for this master class will include music by Girolamo Frescobaldi, Louis Couperin, Jean-Phillippe Rameau and J.S. Bach. Student performers will be from the community at large, including Stanford harpsichord students. The master class will close with a roundtable discussion led by SFEMS Executive Director Derek Tam, who is also an active early keyboard performer. The class is free for both auditors and performers.

Harpsichordist and organist Gustav Leonhardt (1928–2012) was one of the iconic 20th-century pioneers of the revival of early music performance practice. He recorded extensively on various original keyboard instruments as soloist, conductor and continuo player. For decades, his performing and teaching around the world set the highest standard for the interpretation of early keyboard music. He taught and performed in a variety of settings, bringing his unique approach to articulation, touch, gesture and phrasing. His influence lives on today through his lineage of hundreds of students (and now their students), who continue to expand on his legacy.

The master class and subsequent discussion will be videotaped for inclusion in the newly-created Gustav Leonhardt Pedagogy Archive. 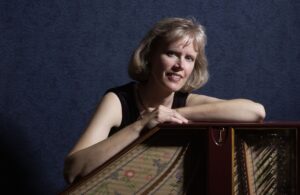 Jillon Stoppels Dupree has been described as “one of the country’s top Baroque musicians, a superior soloist and top-ranked ensemble player;…a baroque star” (Seattle Times). She performs with the Seattle Symphony, Seattle Baroque Orchestra, San Francisco Bach Choir, San Francisco Choral Artists, and Ensemble Electra; her chamber music collaborations include such artists as Wieland Kuijken, Julianne Baird, Ellen Hargis, Ingrid Matthews, Janet See, and Marion Verbruggen. She received both Fulbright and Beebe Fund awards for study abroad, and her teachers included Gustav Leonhardt, Kenneth Gilbert, Edward Parmentier and Lisa Goode Crawford. An honors graduate of the Oberlin College Conservatory of Music and Masters recipient at the University of Michigan, Ms. Dupree has taught at both her alma maters, at Seattle’s Cornish College of the Arts, and was an artist in residence at Stanford University and the University of Washington. She received the National Endowment for the Arts Solo Recitalist award, for performance of contemporary harpsichord music, and her world-premiere recording of Philip Glass’s Concerto for Harpsichord was heralded as “superb!” by the New York Times. She can be heard on the Meridian, Decca, Orange Mountain, Wildboar and Delos labels. 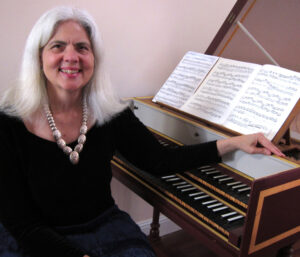 Elaine Thornburgh is heard in residence at various institutions, including multiple music academies in Poland and the University of Virginia. She gives recitals on historic keyboard instruments from the nation’s most prestigious collections, including the Smithsonian Institution, Colonial Williamsburg, the Huntington Museum and the Metropolitan Museum of Art in New York. A prize winner at the Bruges International Harpsichord Competition and recipient of the National Endowment for the Arts Solo Recitalist Award, she also toured California for many years as an Arts Council Touring Artist. She was invited to perform as soloist and ensemble player at CSU Northridge, Fresno County Free Library, Sonora Bach Festival, the California Academy of Sciences, Stanford University, and for various arts councils. She has recorded Scarlatti, Byrd and Haydn for Koch International Classics and Lyrichord’s Early Music Series. Her Scarlatti CD was voted Critic’s Choice by Gramophone. She was a harpsichord student of Alan Curtis while an undergrad at UC Berkeley, subsequently studied with Gustav Leonhardt, and graduated with a Masters in music from the San Francisco Conservatory of Music. She is currently the instructor of Harpsichord for the Department of Music at Stanford University.

The following day, Dupree and Thornburgh will perform Dueling Harpsichords, featuring music of J.S. Bach, J.C. Bach, F. Couperin, Le Roux, Mozart, and Soler. The concert takes place at 1635 Tacoma Avenue in Berkeley, starting at 2:00 p.m. There is a $25 suggested donation (pay by check to 1635 Tacoma Ave or venmo to Ilana Bar-David). For information contact ilanabardavid@gmail.com or call 510-616-0807. The program will be repeated the following night at Stanford’s Memorial Church, starting at 7:30. This performance is free.