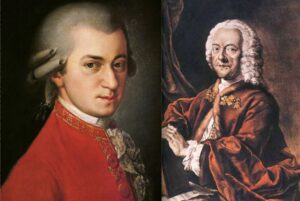 Finding something that two composers have in common can lead to some interesting and, at times, surprising comparisons. For example, Telemann and Mozart were contemporaries. Yet, despite the fact that they were composing music at the same time, they seem to belong to totally different historical periods. Telemann, while making an occasional foray into the newer Rococo idiom, is really firmly planted in the Baroque, while Mozart is already beyond the Rococo and into the final stages of the Classical period that would eventually pave the way for the Romantic period that followed. However, the music of both composers clearly reflects the ideals of the Enlightenment, and both had an ability to write music with impressive speed and facility. 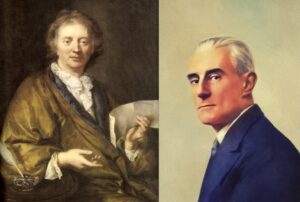 A common nationality can also lead to some unexpected pairs of composers. For example, François Couperin (1668–1733) and Maurice Ravel (1875–1937). Although separated by centuries, the music of the two composers reflects certain common traits that have been characteristic of French music since the Renaissance. These include clarity of form as well as an overall lightness of texture and easy-going elegance. This is most obvious in Le Tombeau de Couperin, in which Ravel seems naturally drawn to the music of the French Baroque as he explores the modern possibilities inherent in the vocabulary and style of late 17th- and early 18th- century music. Other pairs of composers can lead to fascinating comparison as well, including fathers and sons, such as Johann Sebastian and C.P.E Bach, Alessandro and Domenico Scarlatti and Leopold and Wolfgang Amadeus Mozart. And it is always intellectually challenging to explore the works of composers are who are leaders of warring musical camps, such as Brahms and Wagner, and see what they might have in common after all.

Comparing two composers who have something in common not only gives us greater insight into the compositions of each and what influences they may share but also a greater understanding of the musical, cultural and philosophical influences that shaped their music.

On Saturday, February 1, Judith Linsenberg will be presenting a workshop for the Mid-Peninsula Recorder Orchestra entitled, Kindred Spirits: Comparing the music of interesting pairs of composers from the Renaissance to the present. For further information, please visit the orchestra’s website at <mpro-online.org> or telephone Chantal Moser at 408-972-4998.