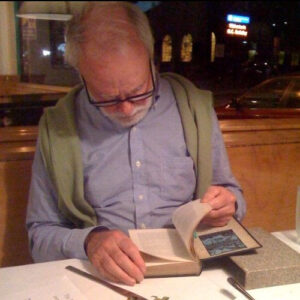 Bill in his element, sitting in front of the cafe.

We mourn the death of Bill McClung, a founder and general partner of University Press Books (UPB) and The Musical Offering Cafe. Bill’s passing comes shortly after the closure of UPB’s physical location in June after 46 years of operation, though plans are being cooked up to enhance the store’s online presence.

Bill’s belief in the power of books to unite people socially and intellectually made UPB a haven for generations of Berkeley bibliophiles. For SFEMS and its members, the UPB and The Musical Offering—which remains open and serving customers during these times—have served as a gathering point for numerous pre- and after-concert gatherings, as well as board meetings and annual meetings.

Bill is survived by his wife, daughter, and son. We send our deepest condolences to Bill’s loved ones, and the special community he sustained for five decades. In his memory, we ask you to continue supporting both University Press Books and The Musical Offering.