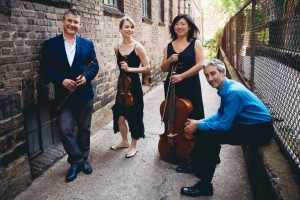 Some of the most exciting and vivid music of the baroque era was written for the opera, and its dramatic qualities had repercussions far beyond the stage. House of Time (Tatiana Daubek, violin; Gonzalo X. Ruiz, oboe and recorders; Avi Stein, harpsichord and organ, and Beiliang Zhu, cello and gamba) will perform dramatic works by three giants of the baroque, including instrumental selections from their operas as well as other music whose character shows the influence of baroque operatic forms and ideas.

Handel and Rameau were the greatest composers of Italian and French opera, respectively. House of Time will play instrumental selections from their operas in new arrangements, including Gonzalo X. Ruiz’s arrangement of Rameau’s rarely heard Zaïs. The daring, impressionistic overture depicts the creation of the world, proceeding from chaos to order, while the dances that follow present the kaleidoscopic world of 18th-century ballet music through the lens of Rameau’s colorful wit.

In Il Pastor Fido (The Faithful Shepherd), Handel summons a vision of the Arcadian ideal. From the stately overture to the thrilling concerto-like movements and pastoral dances, this sublime music carries us from court to countryside and back.

Finally, the concert will feature two substantial pieces by Bach that are imbued with musical theatricality and drama—the second suite for unaccompanied cello, BWV 1008; and the Toccata, Adagio, and Fugue for organ, BWV 564.

It will be a special treat hearing Avi Stein—whom the New York Times describes as a “brilliant organist” play Bach the on the wonderful church instruments of St. John’s Presbyterian in Berkeley and St. Mark’s Lutheran in San Francisco. Avi is a formidable organist and interpreter of North German music. Unfortunately, we don’t have a recording of him at the organ; however, his gifts are fully evident in this exquisite, harpsichord rendition of the prelude in G Minor BuxWV 163 by Dietrich Buxtehude, Bach’s idol.

Both the Berkeley and San Francisco instruments are superb trackers built to replicate German organs of the Reformation era through Bach’s time. The organ at St. John’s is by John Brombaugh, a pioneer of modern baroque and Renaissance organ building revival and one of its most influential craftsman. St John’s houses Mr. Brombaugh’s Opus 20 (1979), which comprises 31 ranks, 22 stops, and 1,418 pipes. Its musical and structural design reflects principles of organ building that prevailed in the Protestant countries of northern Europe during the 150 years that ended with the death of J.S. Bach. The organ at St. Mark’s, Taylor and Boody’s Opus 37 (2006), is even larger, with 2,016 pipes disposed on two manuals and pedal.

SERIES SUBSCRIPTIONS ARE ON SALE NOW!
Mini Series—Three Concerts (Members save 20%, Non-Members save 10%)

HOUSE OF TIME is dedicated to both well-known and underperformed repertoire of the 17th through the 21st century played on period instruments. Members include Juilliard faculty and graduates as well as prize-winners of major international competitions. Using the instruments and techniques of the past to express the vivid passions in the music, House of Time has moved audiences and keeps them coming back for more. Critics have declared oboist, Gonzalo X. Ruiz, “one of only a handful of truly superb baroque oboists in the world” (Alte Musik Aktuell). Tatiana Daubek, violinist, is known for her expressive and personable performances. Harpsichordist, Avi Stein, one of NYC’s finest, is described by the New York Times as “a brilliant organ soloist” and Beiliang Zhu, is described by the New Yorker as “elegant, sensual and stylishly wild.”

House of Time is currently in their 4th season as ensemble in residence at Holy Trinity Lutheran Church on the Upper West Side of Manhattan. They have been presented by Berkeley Early Music Festival, Czech Center New York, Early Music Festival: NYC, San Diego Early Music Society, and The University Club. Upcoming appearances include concerts at the Yale Collection of Musical Instruments and the Lobkowicz Palace in Prague. They also give free outreach concerts at Mount Sinai Concerts for Patients in New York City.

Tatiana Daubek plays regularly with period instrument ensembles and orchestras throughout the country and abroad including Bach Vespers Holy Trinity, the Handel and Haydn Society, Musica Angelica/Wiener Akademie, New York Baroque Inc., and Trinity Baroque Orchestra. Ms. Daubek is a founding member of House of Time, a chamber ensemble dedicated to performing music on period instruments. They are currently in their second season as ensemble in residence at Holy Trinity Lutheran Church in Manhatten and have been presented by The Czech Center New York as well as the Berkeley Early Music Festival and Early Music Festival: NYC. Ms. Daubek has taken part in multiple tours across North and South America with Musica Angelica/Wiener Akademie of The Infernal Comedy and The Giacomo Variations starring John Malkovich.  She will be featured in the new film, The Casanova Variations, starring John Malkovich.  Daubek holds a Bachelor of Music from the University of North Texas, a Master of Music from Boston University as well as a Master of Music in Historical Performance from The Juilliard School, where she was awarded a full scholarship to study under the direction of the distinguished faculty, Monica Huggett and Cynthia Roberts.  Ms. Daubek is currently pursuing a career as a period violinist because she feels there is an endless amount of variety and color within the style and choice of tools to use when performing.  Ms. Daubek is involved with the Festival Jarmily Novotne, a festival commemorating the life of star soprano Jarmila Novotna, in the Czech Republic and gave several inaugural performances last September in Liten, Czech Republic.  She has collaborated abroad with the Czech group, Musica Florea for the Festival Jarmily Novotne and was a featured soloist broadcast live on the Czech Radio.  Aside from music, Tatiana is also a photographer specializing in portraiture.

Gonzalo X. Ruiz is one of America’s most sought after historical woodwind soloists.  In recent seasons Mr. Ruiz has appeared as principal oboist and soloist with leading groups in the U.S. and Europe, such as The English Concert, Sonnerie, Wiener Akademie, Philharmonia, Trinity Wall Street, The Boston Early Music Festival, and Musica Angelica, under such conductors as McGegan, Savall, Manze, Antonini, Huggett, Goodwin, Pinnock, Hasselböck, Rattle, Hogwood, and Egarr.  He has been featured in numerous recordings of orchestral, chamber, and solo repertoire and his reconstructions of the original versions of Bach’s Orchestral Suites received a Grammy nomination in 2010.  Critics have declared Mr. Ruiz “one of only a handful of truly superb baroque oboists in the world” (Alte Musik Aktuell) and “a master of expansive phrasing, lush sonorities, and deft passagework” (San Francisco Chronicle).  For years he has taught at Oberlin Conservatory, the Longy School of Music, and most recently was appointed professor at The Juilliard School.  Mr. Ruiz has given master classes at Yale University, Indiana University, the New World Symphony, and his former students now fill the ranks of many top groups across the country.  Equally accomplished on the modern oboe, he has been principal oboe of the Buenos Aires Philharmonic, the New Century Chamber Orchestra, with recent performances including the concertos of Mozart, Vaughn Williams, and Strauss.  For many years Mr. Ruiz led the ensemble American Baroque, specializing in new music commissions, for which he received the 2000 ASCAP Award for Adventurous Programming.  He is an acknowledged expert in historical reed techniques and examples of his work are on permanent display at the Metropolitan Museum of Art. 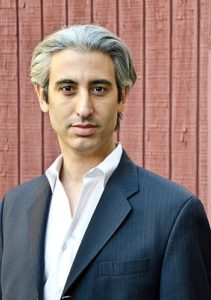 Avi Stein teaches vocal repertoire at the Yale Institute of Sacred Music, continuo accompaniment at the Juilliard School, harpsichord at the Longy School and is the music director at St. Matthew & St. Timothy Episcopal Church in Manhattan. The New York Times described him as “a brilliant organ soloist” in his Carnegie Hall debut and he was recently featured in Early Music America magazine in an article on the new generation of leaders in the field. Avi has performed throughout the United States, in Europe, Canada and Central America. He is an active continuo accompanist who plays regularly with the Boston Early Music Festival, the Trinity Church Wall Street Choir and Baroque Orchestra, the Clarion Music Society and Bach Vespers NYC.  Avi directed the young artists’ program at the Carmel Bach Festival and has conducted a variety of ensembles including the Opera Français de New York, OperaOmnia, and the Amherst Festival Opera. He serves as director of the 4×4 Festival in New York City. Avi studied at Indiana University, the Eastman School of Music, the University of Southern California and was a Fulbright scholar in Toulouse.

Beiliang Zhu won the 1st prize and the Audience Award at the XVIII International Bach Competition 2012 (Violoncello/Baroque Violoncello) as the first string player to have received this honor on a baroque instrument.  She received her Master of Music from the Juilliard School in Historical Performance, Bachelor of Music Degree and Performer’s Certificate from the Eastman School of Music.  Beiliang is currently pursuing a Doctor of Musical Arts at the Eastman School of Music, under the guidance of Steven Doane.  Hailed by the New York Times as “particularly exciting”, and by the New Yorker as bringing “telling nuances”, and being “elegant and sensual, stylishly wild”, Beiliang has performed with internationally acclaimed artists and ensembles, such as William Christie, Masaaki Suzuki, Monica Huggett, the Boston Early Music Festival, the Juilliard Baroque, the Philadelphia Orchestra, the Trinity Wall Street Orchestra and many more.  As Beiliang is interested in a wide range of repertoire and different roles as a modern cellist, baroque cellist, and violist da gamba, she has won a section cellist position of the Rochester Philharmonic Orchestra during undergraduate, has held the principal cellist position of Mercury Houston, and has won awards including the Eastman Cello Concerto Competition, 2nd prize in the Holland America Music Society International Competition, and the 2010 Henry I. Goldberg Young Artist Prize at the American Bach Soloists Academy.