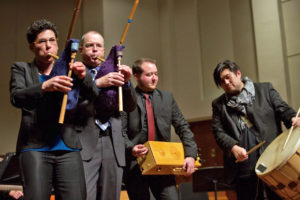 1517—German Music Before and After the Reformation

A watershed year, 1517 marked the beginning of the Protestant Reformation. It also saw the death of the great composer Henricus Isaac and the publication of Johannes Reuchlin’s The Art of the Kabbalah, a landmark book that changed the face of musical symbolism in the Renaissance. Ciaramella’s concert—performed on recorders, shawms, bagpipes, viola da gamba, lute, and guitar—features songs of love, lust, and devotion from the Lochamer Liederbuch, the Schedel Liederbuch, the Glogauer Liederbuch, the Songbook of Anna of Cologne, and the Kodex Leopold. The program includes works of Isaac, Paul Hofhaimer, and Ludwig Senfl, topped off with popular dances collected and arranged by Michael Praetorius.

SUBSCRIBE AND SAVE!
Create Your Own Mini Series—Three Concerts (Members save 20%, Non-Members save 10%)
X
Buy Tickets

CIARAMELLA
Praised for performing intricate fifteenth-century counterpoint “with the ease of jazz musicians improvising on a theme,” Ciaramella brings to life medieval and early Renaissance music from historical events and manuscripts. Its members are united by the conviction that every composition conceals a rich story waiting to be unlocked through historical research and speculative performance. Founded on a core of winds—shawm, sackbut, recorder, organ, and voice—Ciaramella takes its name from the Italian shawm and from a fifteenth-century song about a beautiful girl whose clothes are full of holes. When she opens her mouth, she knocks men flat.

Directed by Adam and Rotem Gilbert, from the Early Music Program at USC Thornton School of Music in Los Angeles, the ensemble performs at major festivals throughout the United States, Italy, and Germany. Performances have included the Cleveland Museum of Art, Bloomington Early Music Festival, Oberlin’s Baroque Performance Institute, the Lute Society of America, the American Musicological Society in Seattle, and on early music series in Cleveland, San Francisco, San Diego, Houston, Arizona, Early Music in Columbus, Salt Lake City, Seattle’s Early Music Guild, the Connecticut Early Music Festival, Amherst Early Music Festival, Renaissance and Baroque Society of Pittsburgh and the Early Music Society of the Islands in Victoria, BC. In 2007 they gave their New York debut at Music Before 1800 and performed at the Tage Alter Musik Festival in Regensburg. Recently the group has performed for Early Music Hawaii, and has created a program for Mission San Antonio and Mission Santa Barbara, CA. Ciaramella has designed programs for the Da Camera Society music series “Chamber Music in Historic Sites” in Los Angeles, and for the Getty Museum in Los Angeles in coordination with specific exhibits.

Ciaramella released its debut CD Sacred and Secular Music from Renaissance Germany for Naxos (2006) and Treasures of Burgundy for Yarlung Records (2009). Their recent CD Dances on Movable Ground has earned five stars in 2014 on the British magazine Early Music Today, and was picked as Editor’s Choice. In their review, leading British early music performer and scholar Jeremy Barlow lauded its “expressive fluidity and rhythmic vitality”. Toccata listed Ciaramella’s recent CD Album of the Month “…when these extremely talented musicians begin to play, their liveliness and freshness is almost palpable. This is not just dance music; at its best, this is living music, current, non-academic, and certainly not old. Dance music was there from the beginning. And when it is played like this, the sounds of 300 years ago sound as if they were made only yesterday.”–Robert Strobl, Toccata-Alte Musik aktuell. In 2014 Ciaramella performed a concert of seventeenth-century music in the Dutch exhibit at New York’s Metropolitan Museum of Art, connecting music to paintings of Breughel, Vermeer and Rembrandt. The group has also performed at the Santa Barbara Museum of Art, LACMA as well as at the Berkeley and Houston Early Music Festivals.

Ciaramella is proudly based in Los Angeles. For more information on the group visit www.ciaramella.org 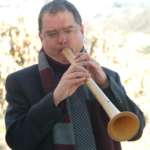 ADAM KNIGHT GILBERT is Associate Professor and Director of the Early Music Program at University of Southern California’s Thornton School of Music. He received his PhD at Case Western Reserve University, and taught musicology for two years at Stanford University. He was the recipient of the 2008 Noah Greenberg Award and co-recipient of the 2014 Thomas Binkley ward with his wife Rotem, with whom he directs the ensemble Ciaramella. He has performed on recorder, shawm, bagpipes, and other historical woodwinds for years with groups including Ensemble for Early Music, Piffaro, and the Waverly Consort. His research includes Renaissance improvisation, composition, and symbolism, music and rhetoric, bagpipes and shawms, and performance practice. He teaches and performs in the US, Israel, Europe, and Brazil. 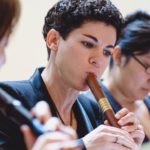 ROTEM GILBERT is a native of Haifa, Israel and a founding member of Ciaramella, an ensemble specializing in music of the 15th and 16th centuries. Ciaramella has performed throughout the United States, in Belgium, Germany, and Israel, and released a CD on the Naxos Label, and two recordings with Yarlung Records. Their recent CD Dances on Movable Ground has earned 5 stars by the British magazine Early Music Today and was picked the Editor’s Choice, lauded for its “expressive fluidity and rhythmic vitality”. She was a member of Piffaro (1996-2007), and has appeared with many early music ensembles in the United States and in Europe. After studies on recorder at Mannes College of Music, she earned her solo diploma from the Scuola Civica di Musica of Milan where she studied with Pedro Memelsdorff. She earned her doctorate in Early Music performance practice at Case Western Reserve University. She teaches musicology and Early Music courses at USC Thornton School of Music. Rotem received the 2012 Dean’s Award for Excellence in Teaching at USC and is the joint recipient (with Adam Gilbert) of Early Music America’s 2014 Thomas Binkley Award for “outstanding achievement in performance and scholarship by the director of a university or college early music ensemble.” Rotem can be heard on the Deutsche Grammophon’s Archiv, Passacaille, Musica Americana, Dorian, Naxos and Yarlung labels. 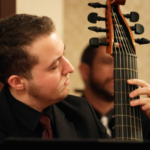 A native of Los Angeles, MALACHAI KOMANOFF BANDY has amassed a professional performance record on some twenty instruments spanning over 800 years of music history. He graduated cum laude with Distinction in Research and Creative Work from Rice University’s Shepherd School of Music with double bass and music history degrees. Over the past few years, Malachai has performed as a violist da gamba and violonist with The Orpheon Consort, Ars Lyrica Houston, and Ciaramella. He is a featured soloist in Bear McCreary’s score to the film 10 Cloverfield Lane (2016) and Emmy-winning title theme for the STARZ television series DaVinci’s Demons. After completing a Wagoner Fellowship-funded individual course of viola da gamba and organological study with José Vázquez in Austria, Spain, and Switzerland, Malachai began graduate studies in Historical Musicology as a Provost Fellow at the USC Thornton School of Music in 2015. He is currently creating the first comprehensive aural catalog of the Orpheon Foundation’s fifty historical violas da gamba (Duino, Italy) with the support of a Presser Graduate Award (2016). His present scholarly interests include topics pertaining to viola da gamba technique, repertoire, instrument design, and iconography. 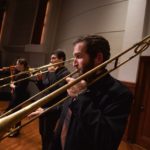 ADAM BREGMAN (sackbut) plays historical trombones from every era, with special interest in medieval, Renaissance and early baroque music. He is a member of the early brass ensemble Oltremontano (Belgium). He performs regularly in Europe and the United States with ensembles including Piffaro, the Renaissance Band (USA), the Huelgas Ensemble (Belgium), His Majesty’s Sagbutts and Cornetts (England), B’Rock Baroque Orchestra (Belgium), Capella Cracoviensis (Poland) and, more recently, Ciaramella (LA). In August 2016, Adam began a PhD in musicology at the University of Southern California. 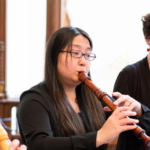 KI NISHIGUCHI is an active performer and educator in the Los Angeles area. She completed a Doctorate of Musical Arts in oboe performance at the University of Southern California where she studied with David Weiss, Joel Timm and Allen Vogel. She has devoted much of her study at USC to performing New Music and Early Music. Aki’s passion for Early Music has led her to study performance practice and period instruments including Baroque oboe, shawm, and recorder with Adam Gilbert, Rotem Gilbert and Paul Sherman. She has performed with early music groups including Ciaramella, Musica Angelica, Bach Collegium San Diego, Harmonia Baroque Players and California Bach Society. She was also awarded a scholarship to attend the American Bach Soloists Academy and Vancouver Early Music Festival where she studied Baroque Oboe with Deborah Nagy and has also performed at the Berkeley Early Music Festival and the Boston Early Music Festival. 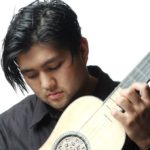 Praised by Mark Swed as “eloquent and serious,” JASON YOSHIDA specializes in solo and continuo performance on lutes and historical guitars. He has performed with Les Surprises Baroques, Angeles Consort, Con Gioia, Corona Del Mar Baroque Festival Orchestra, and the Los Angeles Chamber Orchestra. Yoshida accompanied Placido Domingo in L.A. Opera’s production of Handel’s Tamerlano. He has played continuo in opera productions at UCSB and USC, Hawaii Performing Arts Festival, Bach Collegium San Diego and the Hawaii Early Music Society. He has performed and recorded with Ciaramella at the Berkeley Early Music Festival, Metropolitan Museum of Art, Houston Early Music Festival, Getty Museum, Da Camera Society, and in Hawaii, Arizona and San Diego. Yoshida received international recognition for his CD “Mozart Encomium”, featuring the world premiere recording of Scheidler’s virtuosic “Variations on a theme by Mozart” for Baroque lute. Yoshida can be heard on Ciaramella’s CD “Dances on Movable Grounds” and recordings released by Radio Bremen and Yale University Press. Yoshida received a Bachelor of Music from UC Santa Barbara, a Master of Music in classical guitar and a Doctor of Musical Arts in early music from the USC Thornton School of Music. He is currently on the faculty of the early music department at USC.