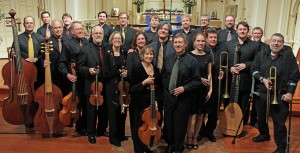 
Magnificat joins forces with early wind ensemble The Whole Noyse to present a Venetian Christmas Mass featuring the brilliant polychoral music of Giovanni Gabrieli juxtaposed with the concertato music of Claudio Monteverdi. Organist at the Basilica of San Marco for three decades, Gabrieli formed a link from Lassus and the High Renaissance to the music of the early Baroque. A year after his death in 1612, Monteverdi arrived to assume the role of maestro di cappella at St. Mark’s and the music he would write in Venice had an profound impact on musical style that still resonates today.

While Gabrieli’s music is firmly grounded in the polychoral tradition of his uncle Andrea and the contrapuntal style of the High Renaissance, his later works reflect many of the new devices emerging from experiments with opera and virtuosic solo writing, notably in his Christmas concerto Quem vidistis pastores. Similarly, though Monteverdi is most closely associated with the music of the ‘secunda prattica’, throughout his life he also wrote in the older style, notably in his Missa in illo tempore, published along with his famous vespers music in 1610 and in the stile antico Mass from his collection Selva morale e spirituale.

This fluidity of compositional style is reflected in Magnificat’s program, which features Gabrieli’s Kyrie and Sanctus posthumously in 1615 together with Monteverdi’s concertato Gloria and Credo from 1640 and his Agnus Dei from 1610. The program will also includes concerti and canzoni by Gabrieli and a motet by Alessandro Grandi, Monteverdi’s colleague during his first years at San Marco.